Late last month, Virgin Atlantic's VS251 landed at Heathrow Airport (UK) with 256 full seats but did not violate social spacing.

The seats, along with the luggage compartment, are filled with medical supplies. It was one of nine flights in which Virgin used a passenger plane to transport breathing apparatus, masks, gloves and other medical supplies between Shanghai and London. Of course, the flight has no passengers.

It is one of the vivid examples of how a pandemic radically changed the performance of the aviation industry. Airlines have long been carrying cargo with passengers but have never intended to use passenger planes to carry only cargo.

But that changed in March 2020, when thousands of flights were canceled because of Covid-19. Meanwhile, demand and prices for goods sent by aircraft soared, facilitating the reuse of idle passenger aircraft.

"Cargo helps planes take off and gives us hope of overcoming difficulties, instead of being shelved on the ground," said Dominic Kennedy, Virgin's Head of Freight Operations. know. 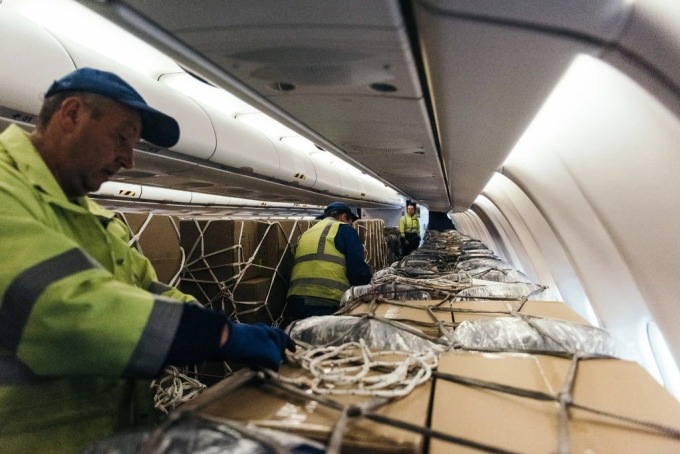 Cargo is loaded on passenger cabin in an aircraft. Photo: NYT

Earlier, Virgin had never used passenger aircraft to perform fully cargo flights. But now, they operate 90 flights per week, even after deep cuts in business. And Virgin is not the only company that has chosen to manage this when the aviation industry's future is uncertain.

In the US, one of the three largest airlines started operating freighter flights in March 2020. American Airlines has not done so for more than 3 decades. But now, they fly 40 flights a week.

Even Lufthansa (Germany) has long separated cargo operations from passengers now taking advantage of the opportunity by converting Airbus A330 passenger aircraft to cargo. Last month, the airline added a number of passenger air cargo flights to bring medical goods from China to Frankfurt.

The goods that people and businesses transport by air vary according to the season, but they are often expensive, perishable, urgently needed or some of all. These include items such as smartphones, auto parts, seafood, pharmaceuticals, mail, and fashion clothes. But a new commodity has appeared in recent months: medical supplies.

Facemasks, gloves, ventilators and the like "create the highest demand for large quantities of goods, but cannot say that other products and goods are no longer in need of transportation", Harald Gloy - Head of freight division of Lufthansa Cargo said.

Typically, about half of all air freight is operated by companies like UPS, FedEx and DHL. The other half is usually carried in the luggage compartment under the passenger seats. But this is not the usual time.

According to the International Air Transport Association (IATA), the reduction of most of the worldwide flights in March resulted in a 23% reduction in air freight. Meanwhile, the demand for goods by air reduced less, only 15%.

The gap between supply and demand, along with falling jet fuel prices, has caught the attention of airline executives. "This is a bright spot for the industry, because it is the only segment that is active and generates revenue of any size," said Alexandre de Juniac, head of the International Air Transport Association.

Worldwide, the average price for transporting a kilogram of air freight was US $ 3.63 last month, up 65% from March 2020, according to WorldACD, a provider of aggregated logistics data. transferred from 70 member firms. This is the highest increase recorded and the largest monthly increase since WorldACD began collecting data in January 2008.

Freight prices from Asia have skyrocketed, due to the demand for medical supplies manufactured in factories there, according to WorldACD. But when the global economy is going down, the demand for goods and freight can drop rapidly.

Until then, passenger airlines will continue to offer cargo flights, and IATA is calling on governments around the globe to help more. In particular, the association urges governments to quickly approve cargo flights, exempt crews from quarantine and help airlines find places to handle cargo and rest for the crew.

In the US, airlines like Lufthansa are slow to use passenger cabs to transport cargo, as they are awaiting approval from the Federal Aviation Administration. Last month, the agency outlined the steps the airline should take to use that space safely. 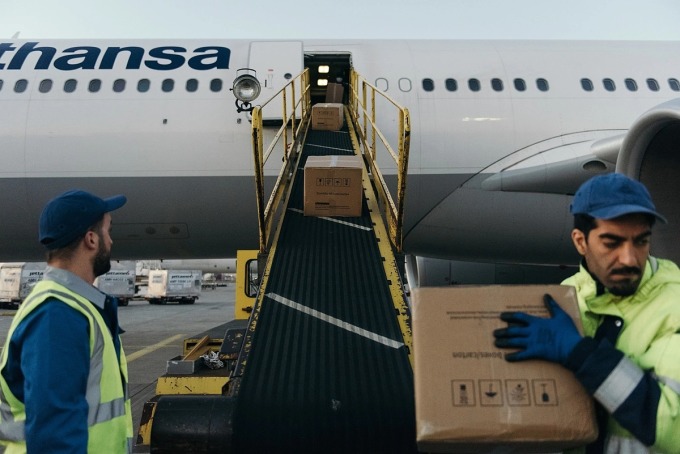 Cargo is transported out of the passenger cabin of the Lufthansa aircraft. Photo: NYT

In Lufthansa, every cargo flight has three flight attendants, compared with 15 on the passenger flight. They are there to make sure the cargo does not move during the flight or catch fire. "The lower level has a fire detection system in the cabin, unlike the passenger compartment because passengers will often observe the abnormality," said Harald Gloy.

"Obviously, this is not only economically unsustainable, but also technical and operational," commented Harald Gloy. However, these days, using passenger planes to transport goods is a possible measure, bringing a little hope for carriers.

"Lack of capacity is a temporary problem. The crisis will affect the transport of goods by air with the same level as other industries," said Alexandre de Juniac.